You are here: Home / Library Staff / The Wolf and the Watchman 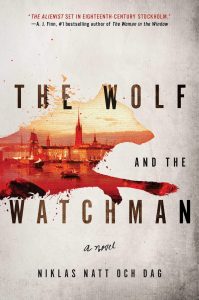 Book: The Wolf and the Watchman

Who should read this: Fans of well-paced dark thrillers, horror, and historical fiction. Warning – this book is very dark and contains graphic descriptions of violence.

Personal impression: I really liked this book, but I have a strong constitution when it comes to dark and graphic material (I was reading Stephen King at age 12…). As such, I wasn’t as much bothered by this aspect of the book. A lot of the negative reviews on Amazon say the book is too dark and violent, but if you can stomach “The Road” by Cormac McCarthy, you’ll be fine.

Review: Take the bleak social disparities of a Charles Dickens novel, spice it up with a buddy-cop murder mystery, add a dash of body-horror, and plop in down in late 18th century Stockholm and you’ll get The Wolf and the Watchman. The official book description/back-cover provides a clear sense of what the book is about, so I won’t spend a lot of time re-hashing the novel’s plot here, except to say that it is fairly straightforward: body is discovered, investigations are made, truth is revealed. This isn’t a twisty mind-bender, and that’s to the books credit. Instead, the author put his effort into creating fully-realized characters that you really care about as they struggle through the incredibly harsh realities of working-class life in 1793 Stockholm. The book explores themes of class, (in)justice, and the messy, bloody reality of democracy’s progress.  After all, the 1790’s were a time of social upheaval; in France, the royalty were, literally, losing their heads.

One thing I really appreciated about this book is that it didn’t fall into the trope of putting a dead, silent girl at the center of the mystery. Instead, the murder victim is a man, and the tragedy and injustice of life as a woman in the emerging industrial era is explored through the living eyes of a main character.  She is given agency and voice, which makes her story that much more powerful. The other three characters comprise a dying detective, a jaded one-armed veteran, and a naive country boy. All four characters are given compelling story arcs with emotionally satisfying (if sometimes tragic) conclusions.

Overall, the prose is well crafted, the plot is well paced, the characters fully developed, and the setting is, for better or worse, completely immersive. This was a book I just couldn’t put down.