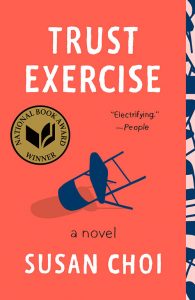 Who should read this: Anyone who enjoys stories with an unreliable narrator and perspective shift, coming of age, theater (or “theatre”), and stories that focus on how people deal with trauma.

Personal impression: I will admit I was somewhat hesitant to read the book based on the description inside the front flap, but I figured it won the national book award, so it was probably worth at least a try. I was glad I did.

Review: This book is many things, both in the sense of what happens, and in the sense of how the story is told. The first half of the book unfolds as a fairly straightforward coming-of-age story, set in an unnamed sprawling southern (or maybe western?) US city, as well as in the halls and classrooms of a charter (or maybe private?) high school for artistically talented youth. The second half of the book revisits a handful of these same characters in their adulthood and calls into question everything we read in the first half. The book ends with one brief, and final shift in perspective that in some ways clarifies the first two sections, and in other ways deepens our doubt about what we have read.

Discussing too much of what this book is “about” will ruin what makes it satisfying. This isn’t to say that “Trust Exercise” is one of those books that sets out to trick the reader or one where, to discuss the plot would ruin some type of revelatory twist at the end. Such twists often imply that there really is only one set of facts, one ultimate truth that we just failed to grasp because we were distracted by the author’s sleight of hand. There is no sleight of hand here. Instead, this is a book that shows us how truth and trauma can be elusive, slippery, muddy, perhaps not totally understood even in the stories we tell to ourselves about ourselves.

Susan Choi exhibits a range of writing styles without ever feeling contrived or dishonest. The first half of the book gives us a story of high school angst and heartache told with a brutal realism and urgency anyone who has ever been a teenager can appreciate. The second section of the book focuses on a different character who is forced to re-visit a trauma from her youth, and plays with identity and narration in an interesting and unexpected way that I enjoyed.

Back to the main blog page